The dream of relaxed, hillside lifestyle led to this outstanding transformation in Cashmere from an unassuming 1990’s plaster home to this sleek cedar-clad renovation from DJ Hewitt Builders.

Entering this elegant home, it’s hard to believe it was a renovation, as you’re greeted by a modern exterior of dark cedar cladding. Refined black window joinery welcomes you in. Blonde cedar fins, thoughtfully lit, frame the ground level, serving as both a visual statement and subtle screening for the bedrooms that lie beyond. The fins line the top of the staircase down to the living level, where your eye is immediately drawn to the expansive city view.

In May last year, homeowners Tania & Dominic moved into what was then a 1990’s plaster-clad home. Tania wasn’t initially convinced that buying the house was a good idea. “I didn’t like the house to start with,” says Tania. Dominic adds, “It ticked all of the boxes that we had for hillside living, though. Other properties didn’t overlook it, it was private, had off-street parking, and a three car garage.” In the end, Tania agreed that it was rare to tick all those boxes on the hill in Cashmere, and she could see there was a lot of scope for improvement. Having a reserve next door was also part of the appeal.

After some discussion, Daryl suggested they meet with Darren from O’Neil Architecture, who encouraged them to transform the home further, with new window joinery, a better kitchen layout and new bathrooms. Wooden decking was added to the previously tiled entrance, and a minor change was made to the footprint to add a concealed cupboard in the entry hall. “We’ve had no regrets doing more work to the home,” says Tania. “It feels completely new to us now. It’s a different house.”

Working with Daryl & Tara Hewitt was a great experience,” says Dominic. “They really took the project to heart. They wanted the home to be the best it could be. Just like it was their own home.”

The couple rented a house in the city during the renovation and only visited the site every few weeks. “Daryl was always available for those site visits,” says Dominic. “Daryl’s team took the stress out of building. Everything was transparent, from minor tweaks and decisions through to spending. They had a clear understanding of what was going to be done from the start.” Daryl estimated eight months for the project, and the renovation was completed in just seven and a half months in May this year. 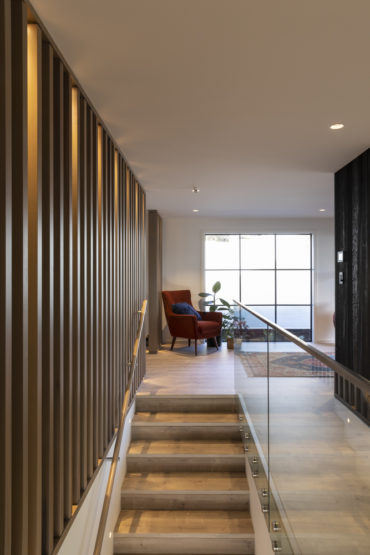 “The project managers were easy to deal with,” says Dominic, who trusted the team to such an extent that when it came to making decisions during the build, he found himself frequently saying, “Just ask Tara what she would do.”

When it came to re-cladding, Tania and Dominic wanted a dramatic transformation and immediately liked the look of black cedar. “We’ve seen it on new homes and just love it,” says Tania, who notes that the cladding will be black once the final coat of stain has been added.

Tara was very involved in the design details of the home and had input into the look of the kitchen, feature wall in the living space and decor decisions. Tania and Dominic visited joiners with Tara to look at the different options for the windows. Tania says, “The original window joinery was cream-coloured aluminium. The windows on partially opened, didn’t give enough ventilation, and there was a lot of condensation.”

When it came to designing the kitchen for the home, Daryl recommended Grant Weston from Sydenham Joinery. Grant and his team were already working on the bathroom vanities and mirrors as well as the cedar fins around the stairwell and they had a great rapport with Tania and Dominic. Daryl has worked with Grant on many projects, and his design input is something that Daryl really values.

Grant and his team worked closely with Artisan Stone and Tara on the design of the kitchen island, creating beautifully unique angles with combination of Silestone and light stained American Oak, accentuated by the considered lighting design.

Dominic says, “After spending last winter in the home, we found it very cold.” More insulation was added to the ceiling and walls to meet current standards, and the couple added two heat pumps – one for upstairs and one downstairs in the open plan kitchen and living areas. The original internal stairs leading into this area were very steep, so these have been replaced with a new staircase with a gentler gradient. A feature partition wall was placed in the centre of the living room to create two separate lounges. An electric fire takes pride of place here and can be enjoyed from either room.

Tania and Dominic are very happy with the renovation. “We wanted a high spec elegant home, and this more than lives up to what we wanted. It’s even better than we could have imagined,” says Tania, who especially loves the beautiful kitchen and the cedar fins. Dominic also favours the kitchen and likes the flexibility of the two living areas. “We enjoy the city views at night with the fireplace and kitchen LEDs for light,” says Dominic. “It’s the perfect place to relax.”

It’s a freindly street,” adds Tania. “The neighbours were very welcoming and put on a neighbourhood afternoon tea when we moved in.”

Tania and Dominic are looking forward to entertaining this summer and plan on enjoying their better-than-ever home for many years to come. 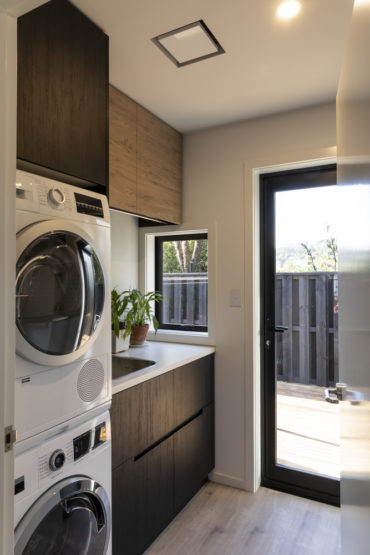 Are you ready to make your dream home a reality?

Take the first step and give me a call.

Get our showcase of inspirational projects and journeys we have undertaken alongside our clients over recent years.

Get our showcase of inspirational projects and journeys we have undertaken alongside our clients over recent years.